On Monday mornings millions of professionals like you look at their calendars and think “I’ve got too much to do!”

Most professionals hear that they need to be networking, though they don’t know how to fit in into their schedule and whether it will really be worthwhile. They wonder if they’ll get real value, or just waste time.

So, we wanted to find out: What does it mean to network successfully?  How do professionals maximize the value of their networking? What might an “ideal” networking event look like?

We set out to learn more about people’s mindset on this important business function.

We sent out targeted emails to several hundred contacts, inviting them to take a brief survey.  The respondents described themselves as 55% owners, executives or managers; 21% individual contributors; and the remainder contractors, business development representatives, and job seekers. As you’ll see, these people had very interesting ideas about what networking means to them…. 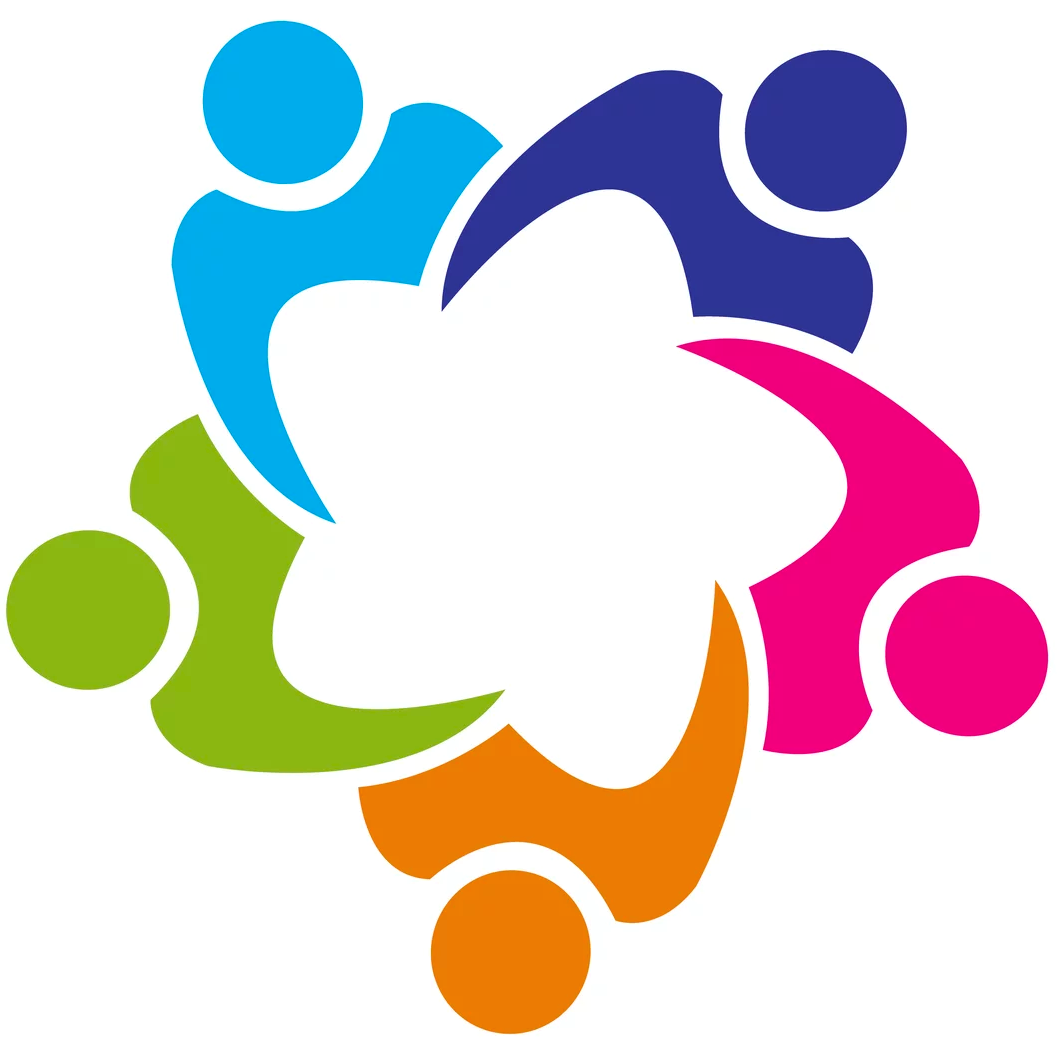 We first asked how people defined networking. For our respondents, the most common definition is the opportunity to meet people face-to-face.  This was consistent with our expectations: when most people think of networking, they’re thinking of individuals chatting away. Secondary to face-to-face meetings, people defined networking as learning and connecting to others in ways relevant to their work situation. Somewhat surprisingly, the least important definition of networking was a direct connection to sales.

We then sought to find out how an individual worked the room. Were they likely to pick a spot and “camp” there to see who stopped by to say hello, or were they more likely to explore and circulate about the room and talk to other folks who were “camping”? Most people choose to circulate in the room. 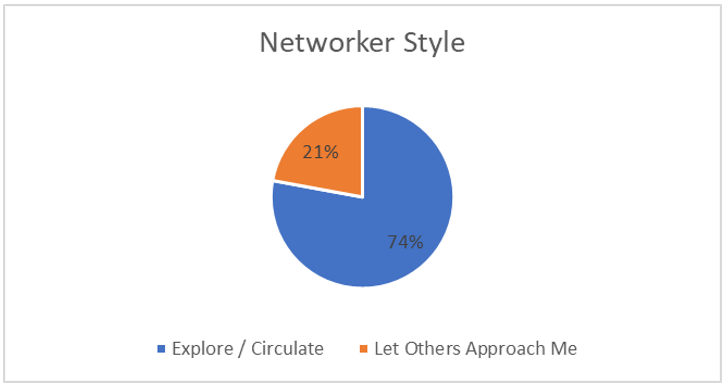 We then asked people how often they attended a networking event. Nearly two-thirds said they attended networking events once or less per month; only a relatively small proportion of people reported that they network regularly, despite the well-established idea that networking is valuable for personal and career development.  This surprised us and implies that those who sponsor networking events should carefully consider the value they put into events so that they attract attendees, and therefore get more bang for their sponsorship buck. 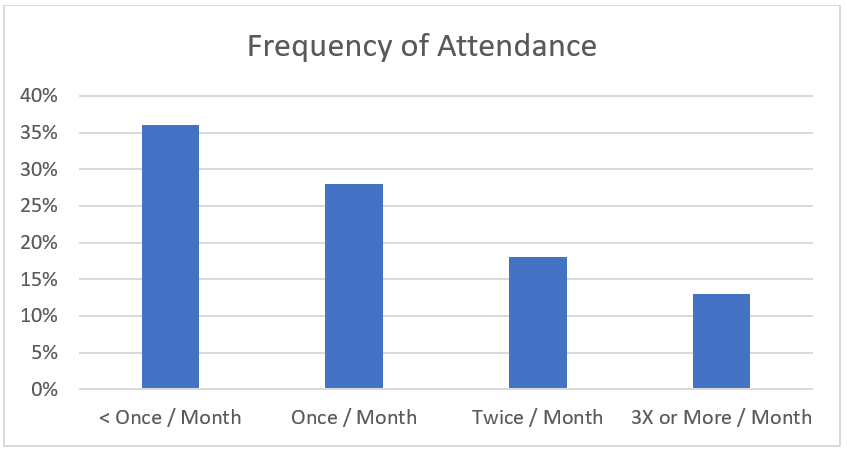 When do people want to network?  According to our respondents, while a few didn’t care, the results were surprisingly clear: evening wins! This finding seems unusual, as it stands in contrast to those who say pre-work morning events or lunch-and-learns are best. 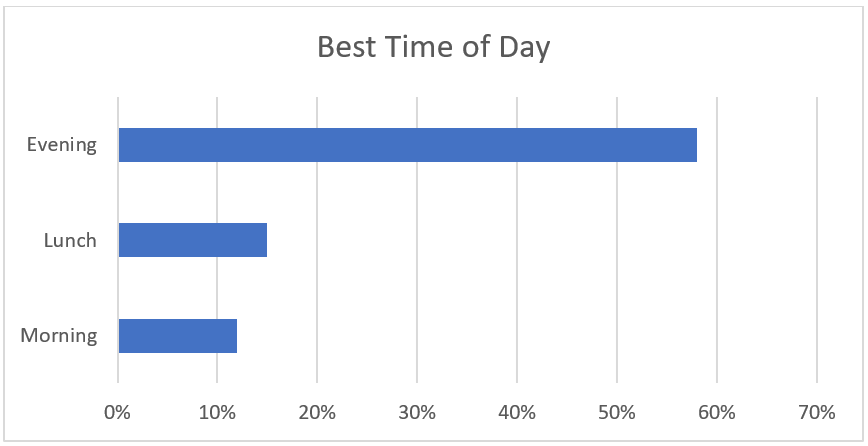 Regarding the best size for a networking event, the clear favorite was “below 50”.  For event planners, this is an interesting discovery: excluding conferences, more is not always better, and a smaller crowd would seem to be more attractive to potential invitees. 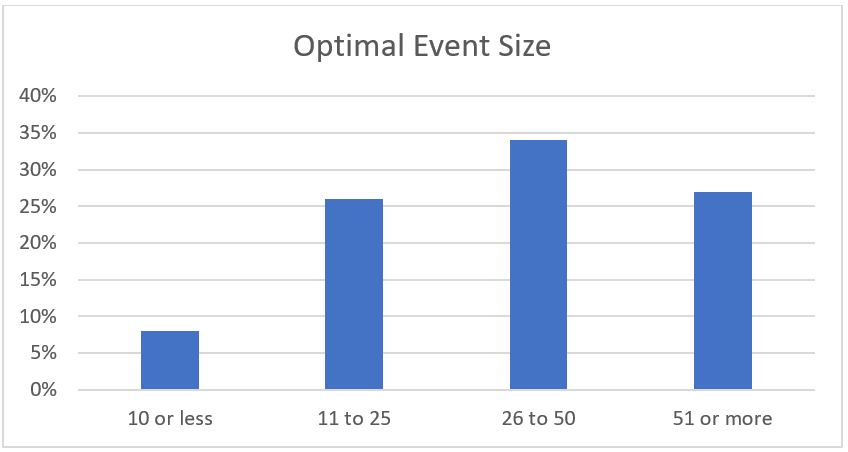 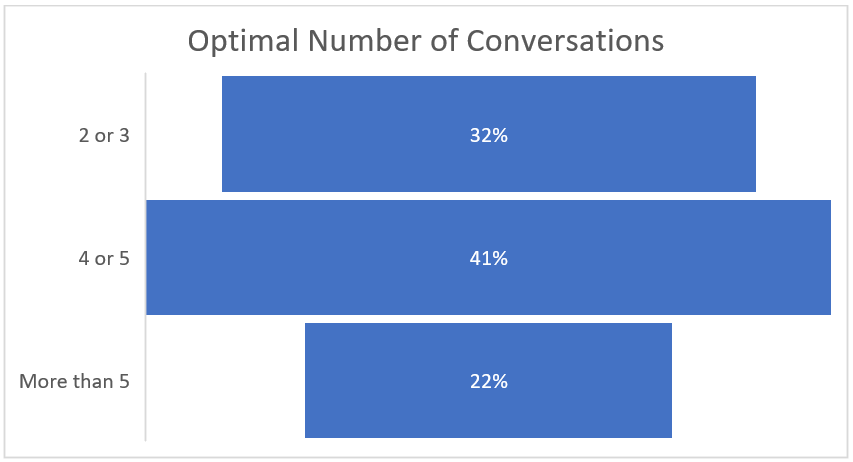 As for how people decide which events to attend, we asked how many chances someone would give an event before deciding not to attend. And we got a very clear signal: 78% of our respondents would give an event no more than two chances. People’s time is precious, and they won’t waste it. So, for all you event planners out there, better get it right the first time – two strikes and you’re out!

Getting them out of the office…?

Why do our respondents attend events? Their top reason for attending was business development. After that, learning content was a popular choice. Surprisingly, job seeking was not the primary reason (these) people network, but this may have been due to the relative seniority of the respondents. “Building a bench” – attending events to identify potential employees – was dead last. The latter was not a surprise but suggests an opening for action. 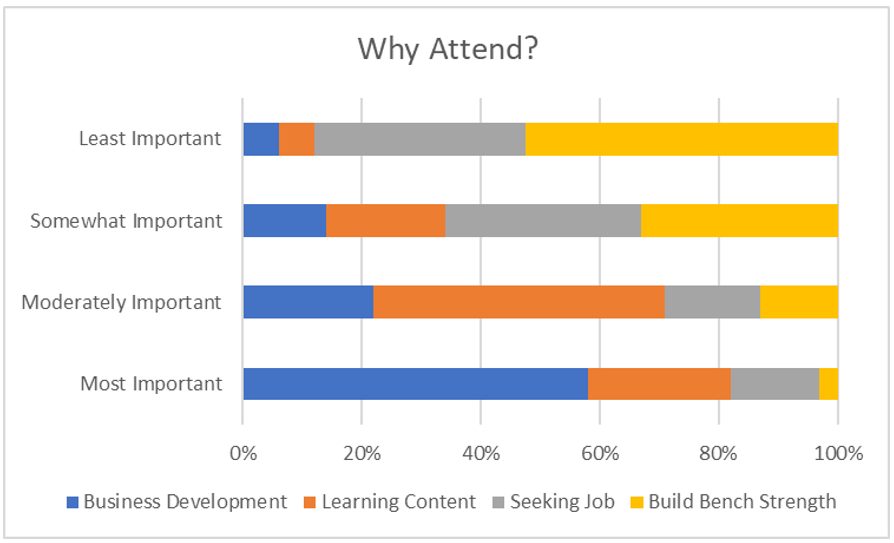 Given the choice of either LinkedIn, business cards, or both, the clear winner was both (80%). LinkedIn is as popular as business cards, but not a replacement, and our respondents clearly see both as useful tools. 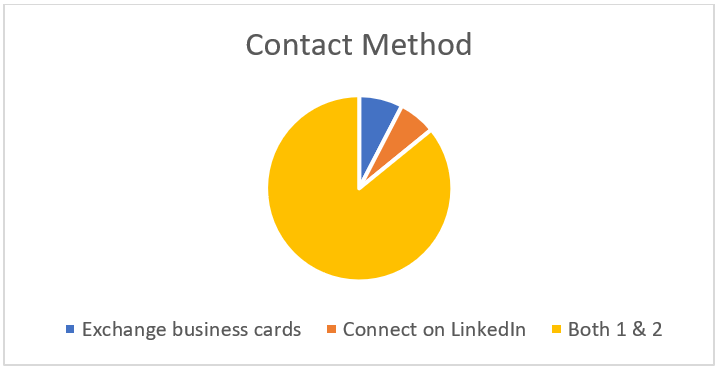 The vast majority use LinkedIn and business cards to stay in touch generally, and a significant proportion (25%) use business cards and LinkedIn in different ways. While those findings were expected, we were surprised to find that only a small proportion use these for deliberate follow-up. 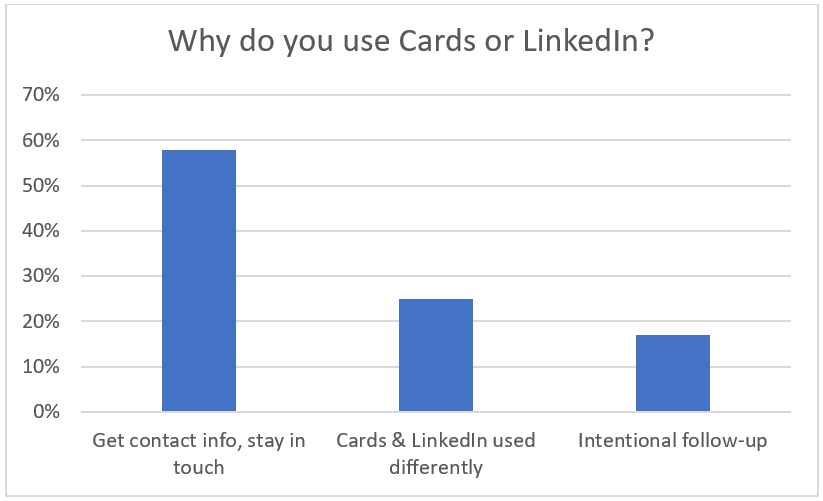 How do our respondents find events to attend?  Their existing network is a clear favorite.  Close behind that is word of mouth. Together, “existing network” and “word of mouth” were the overwhelming favorites: 75% and 60% most/very important, respectively. These results make sense, as one’s own network is presumably a trusted source of information, and word of mouth might come from there as well. Surprisingly, trade sites, LinkedIn and Meetup are the least-useful: digital does not rule this space. (Note: rounding causes some categorizations to vary slightly from 100%.) 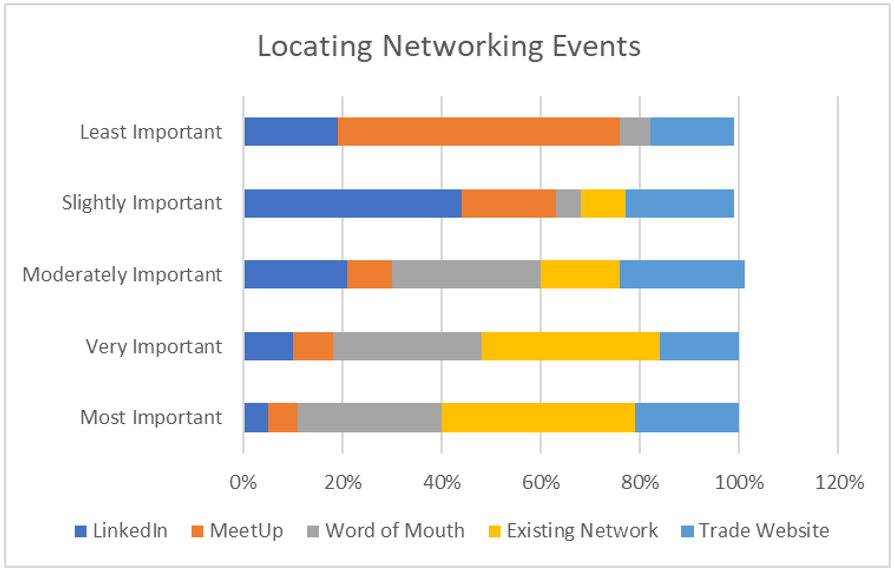 How to pique interest

Our respondents are most interested in attending networking events featuring relevant people and learning opportunities. Somewhat surprisingly, the cost is less important, and promotional opportunities least important. As with our initial question about networking definitions, it’s clear that while a job-related interest is not uncommon, sales per se is not why these people network. (Note: the cost we included in our definition of a networking event was defined as under $100; rounding causes some of these categorizations to vary slightly from 100%.) 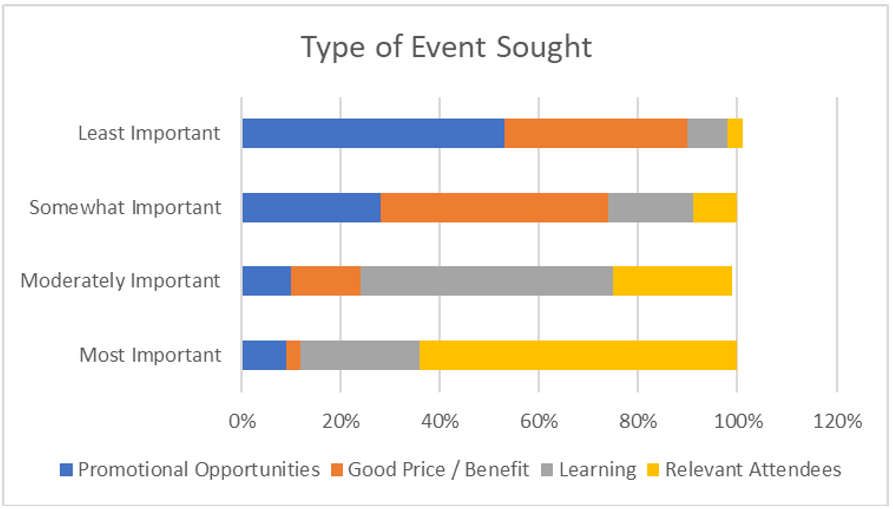 Do people take care of and purposefully seek to add value to their contacts? 90% of our participants said yes, they want to create value and nurture their network. 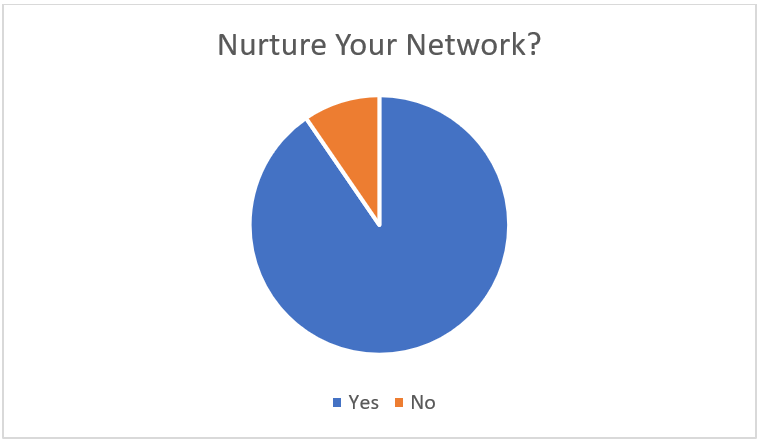 The medium used to nurture a network

As for how people take care of their network, 66% use the most-personal touches: calls and meetings. Again, digital is not the preferred method. Everyone nurtures their network, and the most common method is “all of the above”; of those who use one method, the majority choice is to use social media or email. This latter result is surprising because while emails are easy, they are known to be ineffective: a high proportion of emails are neither opened nor acted on. 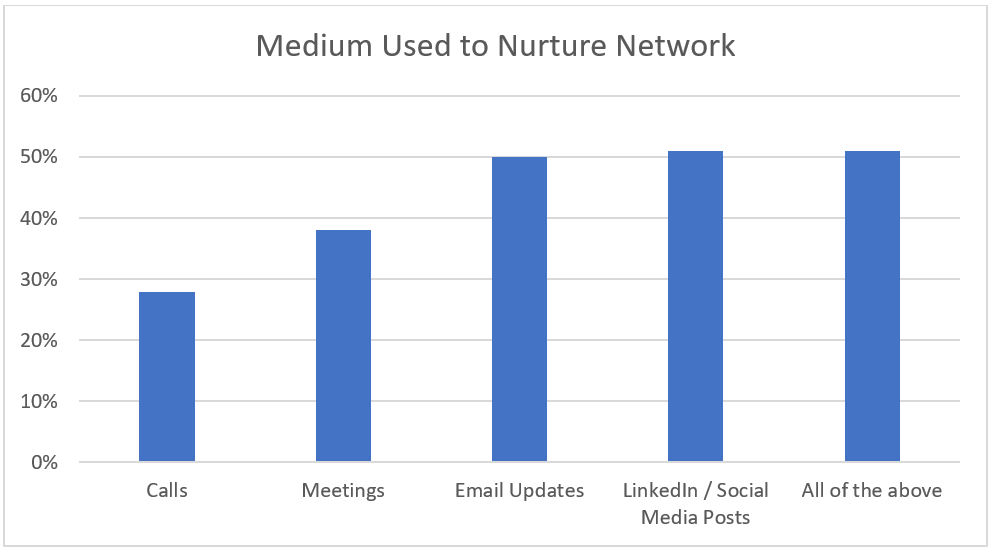 How you nurture your network

Finally, we asked how people nurtured their network and what value do they offer their contacts? The most popular technique is professional referrals and introductions, but other popular choices include business opportunities and networking events. Least often used: sharing learning content and job leads. 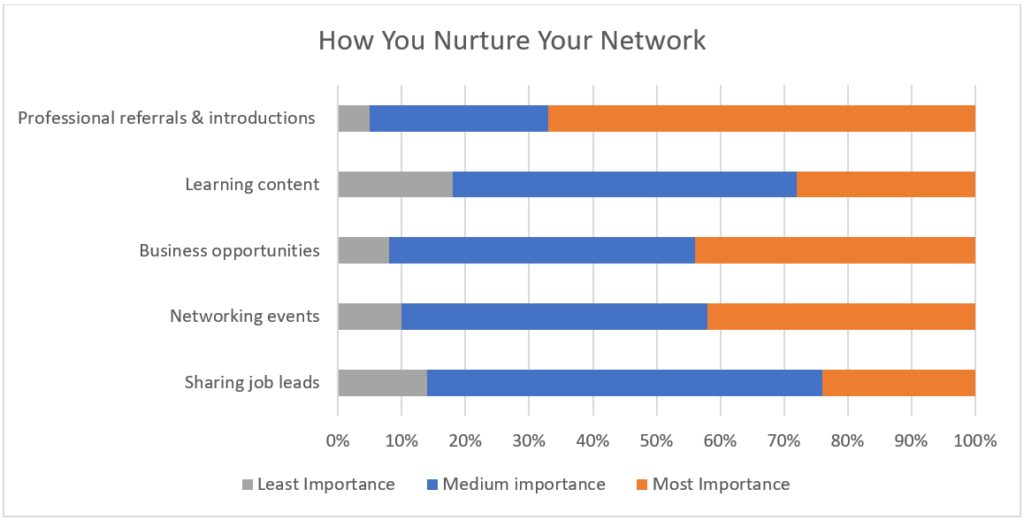 Based on the above findings (and subject to the usual caveats about generalizations – and about roads paved with good intentions), what might an “ideal” networking event look like?

First, it would be face-to-face, with the chance to learn and connect with others in ways relevant to the attendee’s profession.

It would allow folks to roam around. A “speed dating” format might not be apropos, but a mechanism to keep people circulating might be well-received and effective.

The event has to be attractive, to lure in the majority of folks, who attend networking events once or less per month.

It probably should be in the evening, after work, with the total number of attendees topping off around 50 and allowing enough time for people to have about 5 conversations.

Importantly, the event must be a positive experience for folks the very first time they attend, and/or actively encourage them to attend again.  Otherwise, it’s “two strikes, you’re out!”

The use of both business cards and LinkedIn should be embraced, as they are useful tools for staying in touch in general, and for unique uses of each.

People can be drawn to an event through the powerful and effective means of their existing network and word of mouth, and the most-attractive networking events feature relevant people and learning opportunities.

Attendees might be encouraged to follow-up or nurture their networks via familiar methods of personal calls and meetings, as well as the time-effective use of social media or email.

Finally, attendees might be reminded to offer real value to their contacts: chiefly professional referrals and introductions, but also new business opportunities and networking events.

Networking can be worthwhile and helpful – both welcoming and welcomed.  Attendees must feel that way, and have their own needs addressed, for them to begin and continue to engage in it.

We hope to see you at an upcoming networking event! 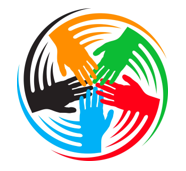