Sources of hire information is of value to anyone involved in the hiring process because it helps determine the origins of a hire.  Armed with this information, hiring managers can make better decisions on where to allocate resources.

Likewise, it is important for job seekers to prioritize where their likelihood of success is greatest.  Since companies use Sources of Hire information for their benefit, as a job seeker, why shouldn’t you?

In SilkRoad’s 2017 Sources of Hire report, the company reviewed 14 million applicants, 655 thousand interviews and 329 thousand hires and segmented outcomes between interviews and hires.  The report’s findings state that “Employee referrals remain the top sources for hires” and “Indeed pulls in the most interviews”. 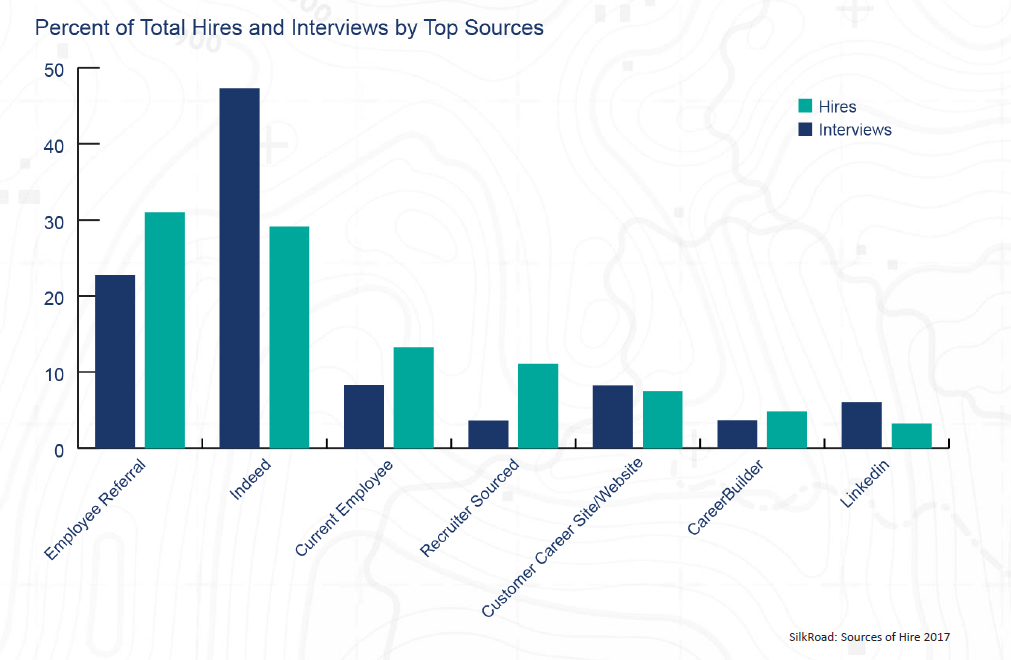 JobVite’s 2018 Recruiting Benchmark Report analyzed 55 million job seekers and  17 million applications.  Both the SilkRoad and JobVite reports are worth reviewing in their entirety as they offer additional insights beyond the scope of this post.  Each report has a few different characteristics when considering sources of hire.  For instance, JobVite aggregates sites like CareerBuilder and LinkedIn into a “Job Boards” category.  JobVite also has an “Effectiveness” category which is useful in discerning the most effective methods of hire. 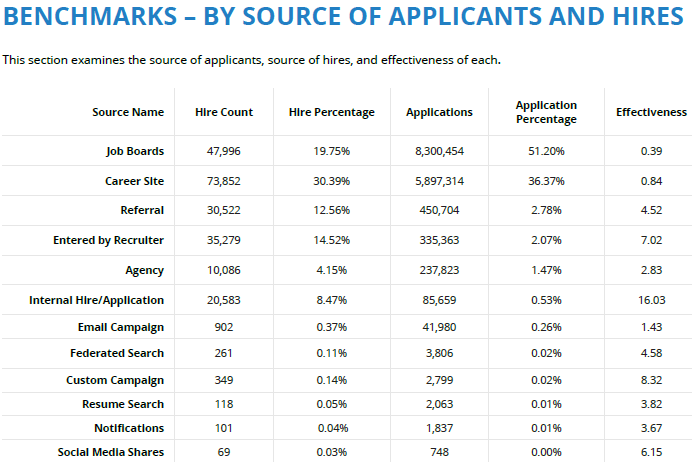 Effectiveness versus Volume?  It is worthwhile to point out that the Effectiveness category might lead one to conclude that efforts should be concentrated around those with higher rankings.  However, the sheer volumes of hires found in some categories indicate that concentrating too much on Effectiveness may yield small incremental results.  For example, Social Media shares are ranked the fourth most effective category, but these shares only resulted in 69 hires (.03%) which is insignificant compared to the 73,852 (30.39%) hires made from the Career Site category.

What about specialty skill sets?  I would be very interested in seeing these reports and/or others focus on recruitment of more difficult to fill skill sets.  The hypothesis is that the mass hiring numbers found in these reports may not represent how professionals with highly coveted skill sets actually obtain jobs.  In other words, the ratios of hires from referrals and recruiters should be higher relative to percentages of hires from job boards, for highly coveted skill sets.

IF a job seekers skills are well represented by these reports, a dashboard can be designed to help drive job search strategy.  With the JobVite and SilkRoad reports as our benchmarks, a job seeker might expect to spend the following percentage of time pursuing each category. 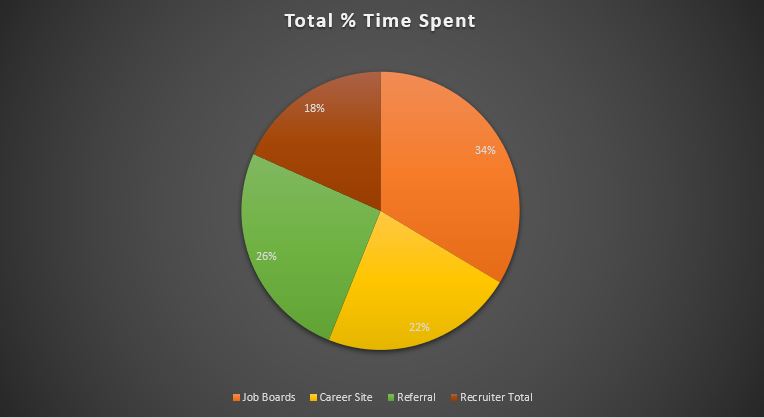 How was this graph designed?  As the SilkRoad report expressed outcomes as percentages rather than numerically, we estimated the hire count in each category based on the graphical lines shown above.  We added JobVite’s “Entered by Recruiter” and “Agency” categories into a new category called “Recruiter Total” which would proximate SilkRoad’s “Recruiter Sourced” column since SilkRoad does not have a separate category for Agency which is a third-party recruiter such as GeneCoda™.  We then added SilkRoad’s “Indeed”, “Career Builder” and “LinkedIn” categories together to proximate JobVite’s “Job Boards” category.

We then subtracted all categories except “Job Boards”, “Career Site”, “Referral” and “Recruiter Total” from report totals and divided each of these categories by the remaining total to get a representation of how much time a job seeker might spend on each category.  Finally, we averaged the report’s percentages to arrive at our conclusions.

Variance?   The differences between each report’s percentages or variance are important to review since each report comes to significantly different conclusions for each category.  Using our method, the variance between the reports was much larger than anticipated with double-digit discrepancies found in all categories.  The most striking variance at 29% was the Career Site category with JobVite at 37% and SilkRoad at 8%. 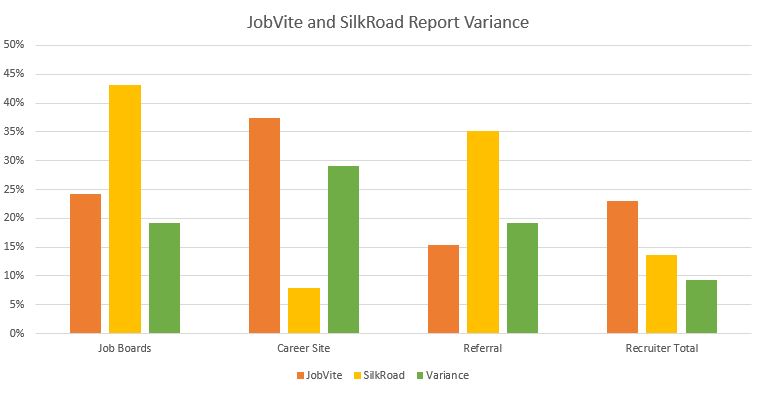 What about networking?   The idea of networking in our analysis might best be captured under the Referral category although networking might also be covered under the Recruiter category.  Using either report, our analysis indicates that sourcing through electronic means (Job Boards + Career Site) represents more than 50% of all hires made which would refute the commonly held belief, in this case, that networking for job seekers results in 70-85% of all hires.  Although we have not uncovered studies that indicate such, networking (as represented by Referral and Recruiter Total categories) likely increases as a percentage of the total when there is higher relative demand for the skill sets sought.

How traceable and measurable is Source of Hire?  The 2016 Source of Hire study by the WorkPlace Group and Frostburg State University offers insightful information on the use of Source of Hire information.  The presentation also contemplates how different parts of the sourcing process influence job applicants and ultimately, the idea that the use of a single category for attribution might be erroneous as alternative factors come into play during the hiring process.

Summary:  As companies use Sources of Hire studies to allocate resources, job seekers should also allocate time spent on various categories to optimize the chances for success.  Surprisingly, our findings indicate that networking does not play as prominent a role in Sources of Hire as it once did.  We were also struck by the significant variances found in the reports and proffer the hypothesis that skill sets in tighter supply would likely increase the number of jobs found by networking (Referral + Recruiter Total categories).  With these caveats in mind, if job seekers mirror the patterns found in using Sources of Hire as a benchmark job search strategy, our analysis indicates that job seekers should spend about 34% of their time on job boards, 22% of their time on career sites, 26% in working the network for referrals and 18% of time spent in working with recruiters.